Schooner 101: What do YOU know about the Schooner? 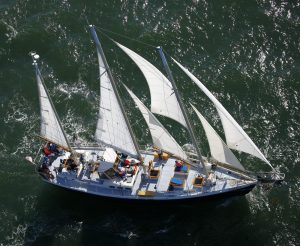 What better way to learn about schooners and sailing than to set sail aboard The Liberté in 2019?

While you may know that The Liberté is a schooner, do you know which qualities distinguish a schooner from other vessels sailing on the water? What better way to learn about schooners and sailing than to set sail aboard The Liberté in 2019? Before you set sail on this exciting adventure in the new year, consider these fun facts about the rich history and recognizable characteristics of a schooner!

Size and Qualities of the Schooner

A schooner is a sailboat built with a minimum of two masts. With this, the foremast is typically slightly shorter than the first or main mast. While a schooner may sometimes have more than two masts, most schooners contain only two. The size of the schooner enables it to sail upwind with ease, making for an enjoyable and efficient sail.

History of the Schooner

Throughout its early history, the schooner was even known to be the preferred vessel of pirates! Because of their speed and efficiency, schooners were recognized as pirate ships sailing around the Caribbean, often holding more than 60 men at a time. In true pirate ship fashion, many schooners also contained nearly ten guns, with swivel guns included as well.

Schooners and the Adventure of Sailing

In addition to being an exciting piece of history, a schooner also offers a fun, first-time sailing experience! Not only is sailing a great way to get outside and enjoy the day, but it is also a special experience that can be shared with your friends and family aboard The Liberté. Plan your adventure in either Cape Cod or Annapolis for 2019, and experience the magic of a schooner this year!

Enjoy a Sail with Your Family Aboard The Liberté!

The Liberté provides private charters in Cape Cod and Annapolis as well as public sailings in Cape Cod. Celebrating aboard the magnificent Liberté is a great way to create cherished memories that are sure to last a lifetime. If you want to charter The Liberté for your next corporate event or wedding reception, contact The Liberté today! Call us today and we will be sure to respond within 24 hours. Be sure to also check us out on Facebook, Google +, and Twitter.

Categories: Uncategorized | Tags: sail, schooner, and The Liberte
This entry was posted on Friday, January 18th, 2019 at 10:59 am. Both comments and pings are currently closed.