3 Fun Facts About The Schooner 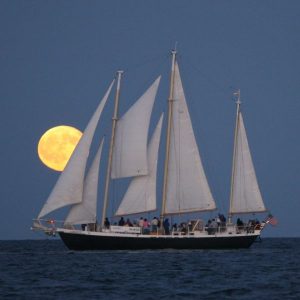 The Liberté is a schooner, a sailing vessel that has been used for a variety of purposes since the 1700s. Continue reading to learn about a brief history and qualities of the schooner, then book your sail on The Liberté today to learn more fun facts about the ship!

How The Vessel Got Its Name

The first schooner sailing vessel was launched by shipbuilder Andrew Robinson is 1713 in Gloucester, Massachusetts. A spectator watched the ship move smoothly across the water, and said: “Oh, how she scoons!” The term “scoon” is a Scottish term meaning “skim,” and this comment is believed to be the reason why Robinson named the vessel schooner! The design of the schooner eventually led to the development of the famous Clipper ship design. With its origins in the Chesapeake Bay, the Clipper ship design became more popular as the descendant of the schooner.

Qualities Of A Schooner

The schooner has the ability to glide across waters at fast speeds and grace due to its construction. The schooner has two or more masts, and the forward, or front mast, is either shorter or the same height as the mast toward the back of the ship. A traditional schooner is gaff-rigged, meaning that it has a square topsail on the front mast. Another important quality of the schooner is its sails that run the length of the deck, which allows it to catch the wind at a closer angle. The placement of the sails is very important, as it allows the ship to move closer to the wind, which gives it more power and speed.

The Making Of The Liberté

The Liberté is based on Spa Creek in Annapolis, Maryland, but during the summer months (June 29th to September 2nd) the boat is docked at the Patriot Party Boats pier in Falmouth harbor in Cape Cod, Massachusetts. The Liberté’s captain, Captain Chris Tietje, and his wife Jane Tietje had the vessel build just for them. Captain Chris purchased the first Liberté, a replica of an 1850’s Pinky Schooner, in 1990. Ten years later, he and Jane decided to build a bigger boat, and that is how he the “new” Liberté came to be today!

Plan Your Perfect Day of Sailing Aboard The Liberté Today!

The Liberté provides private charters in Cape Cod and Annapolis as well as public sailings in Cape Cod. Celebrating aboard the magnificent Liberté is a great way to create cherished memories that are sure to last a lifetime. If you want to charter The Liberté for your next corporate event or wedding reception, contact The Liberté today! Call us today and we will be sure to respond within 24 hours. Be sure to also check us out on Facebook, and Twitter.

Categories: Sailing | Tags: facts, sailing, schooner, and The Liberte
This entry was posted on Monday, May 13th, 2019 at 11:42 am. Both comments and pings are currently closed.